One of my gun-instructor buddies expressed interest in a reverse-edge knife, so after thinking about the design for a couple of weeks, I drew this up. I included a rather pronounced grip angle to reduce self-injury, even with full wrist pronation. 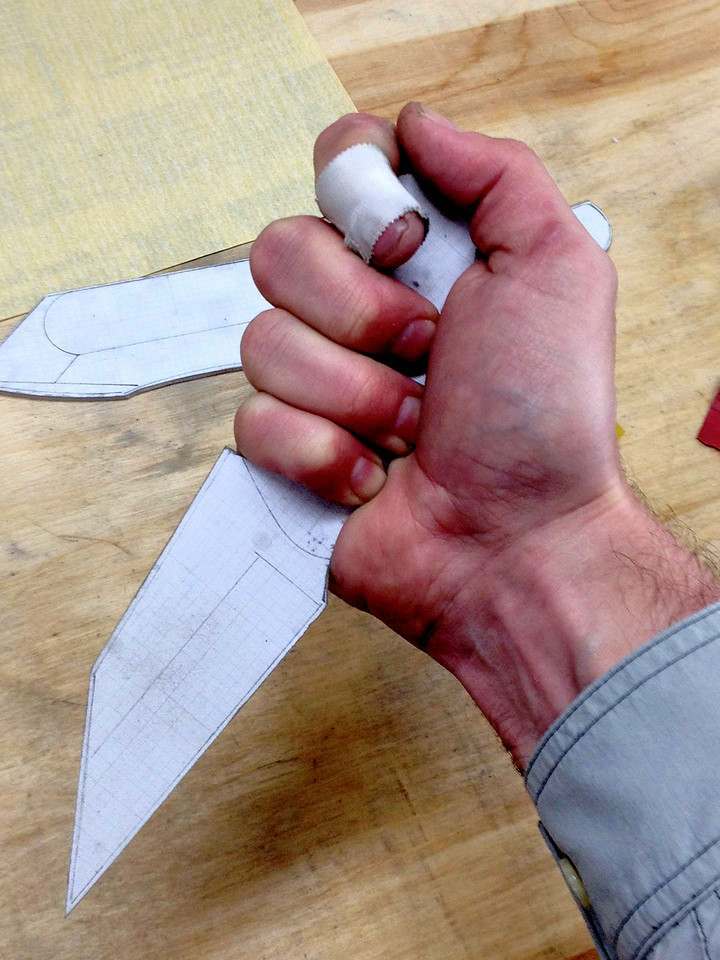 Here is the REH template on a piece of 5/32" O1.  The template above it is my Chisel Tanto. 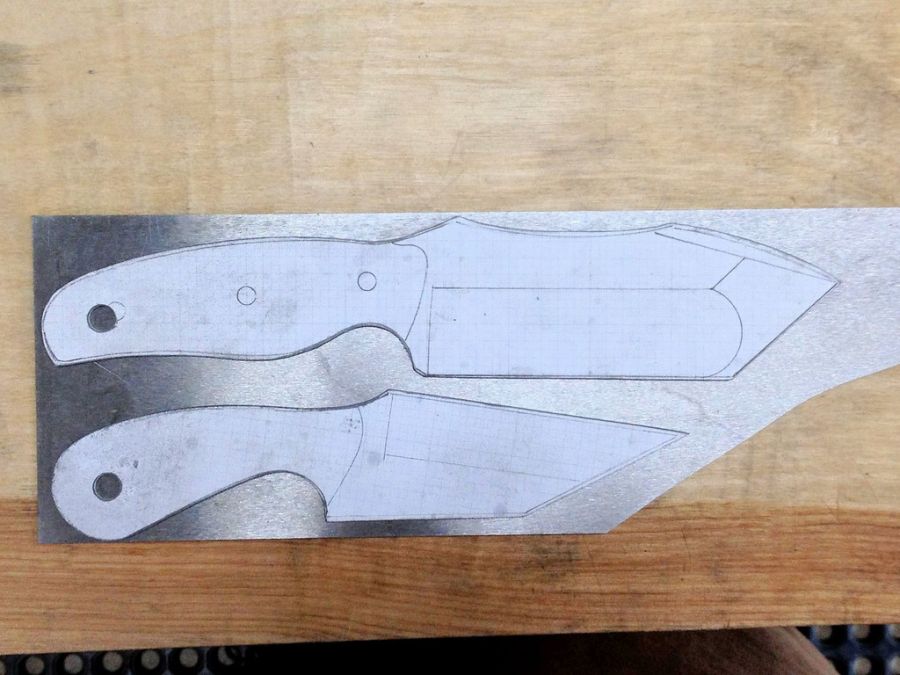 Roughed out with the bandsaw and ready for the KMG. 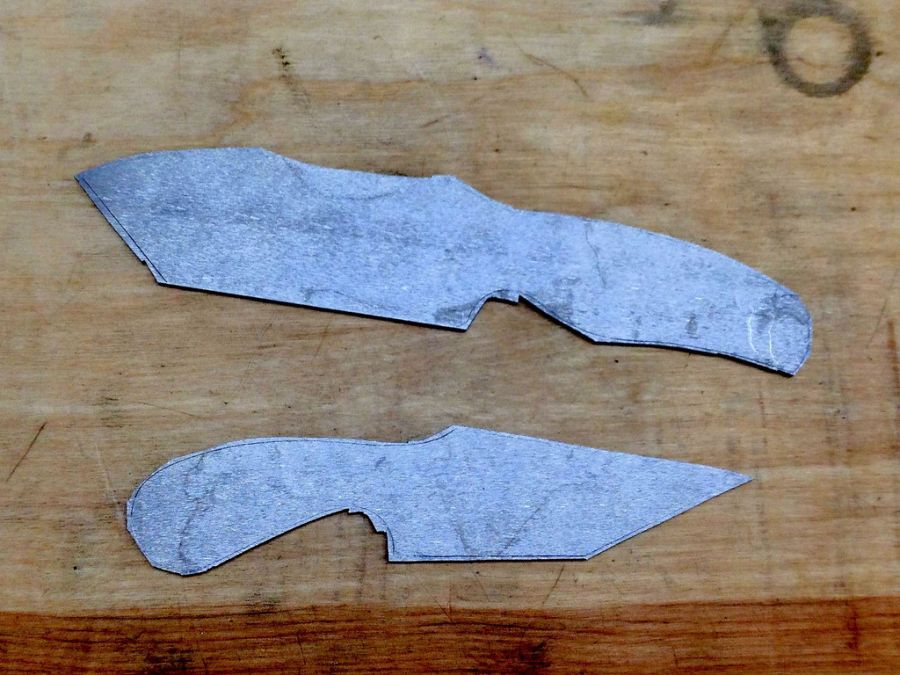 Everything's profiled and ready for the drill press. 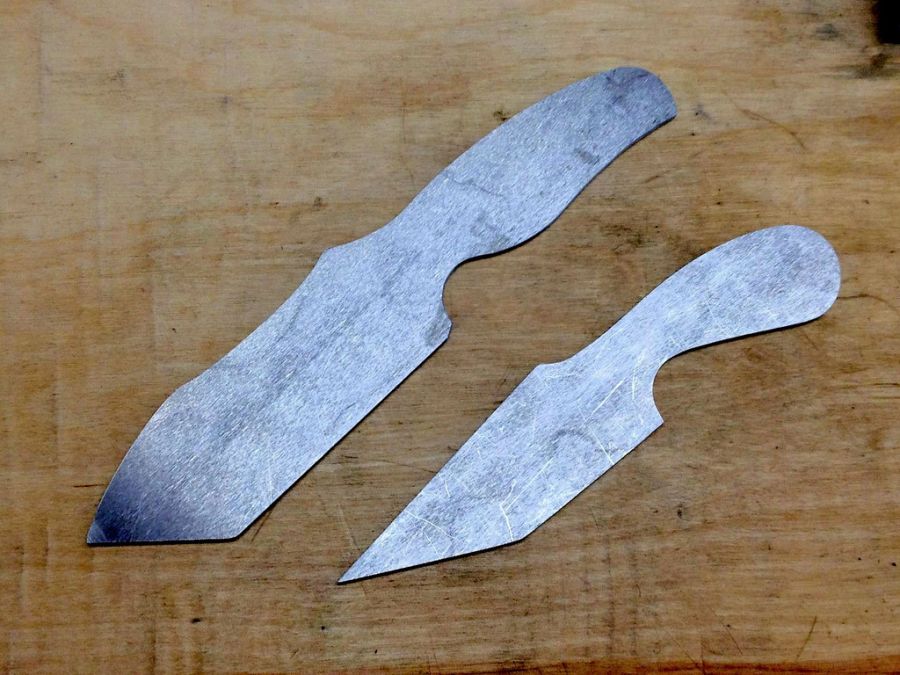 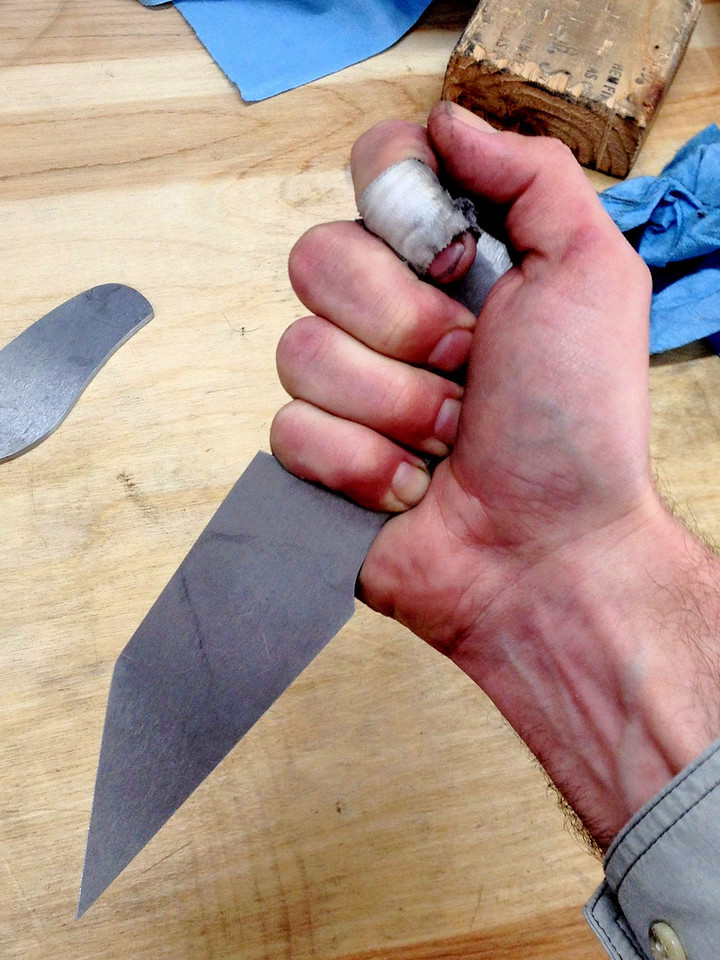 I like the idea of wearing a knife in the appendix position. That way it's accessible by both the strong and support hand. You'll have to watch that support thumb, though.

Got the holes drilled/chamfered and the flats cleaned up. The REH is now ready for HT.

Here's the batch after returning from the heat treater.  The REH is second from right.

The heat treat scale has been removed and the flats are cleaned up in preparation for the bevel. 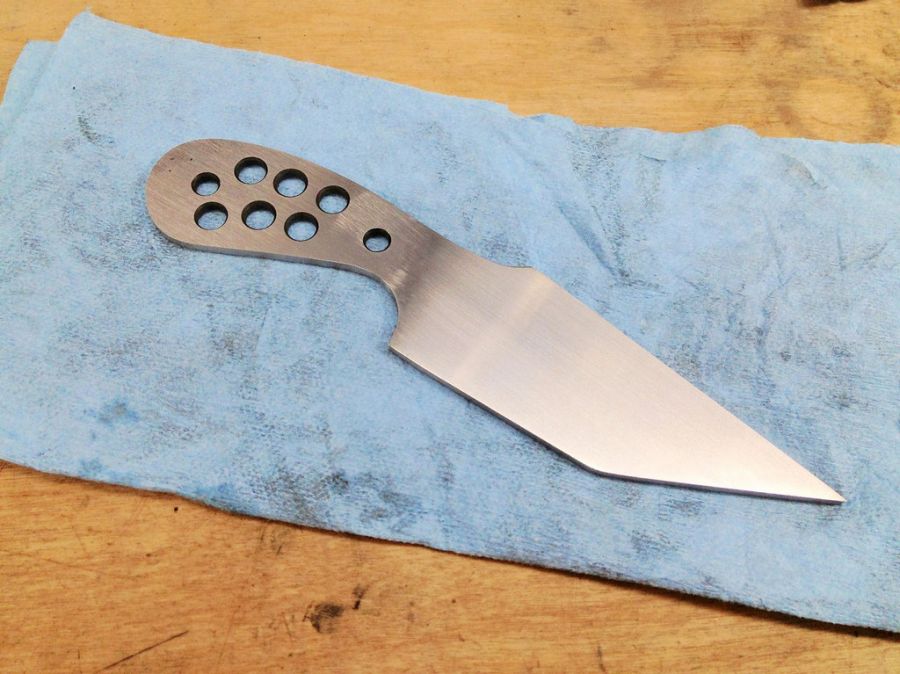 I then moved up to a new 120-grit 977 to clean up the 60's scratches before continuing with my normal Trizact progression. 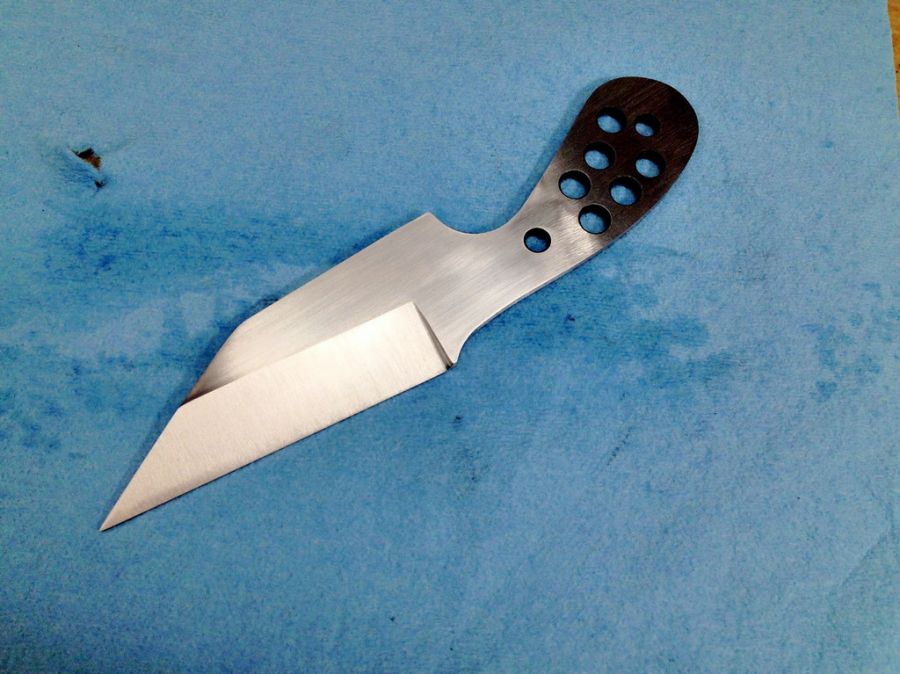 I then cleaned up the flats by hand-rubbing with 400-grit, and then 600-grit sandpaper. 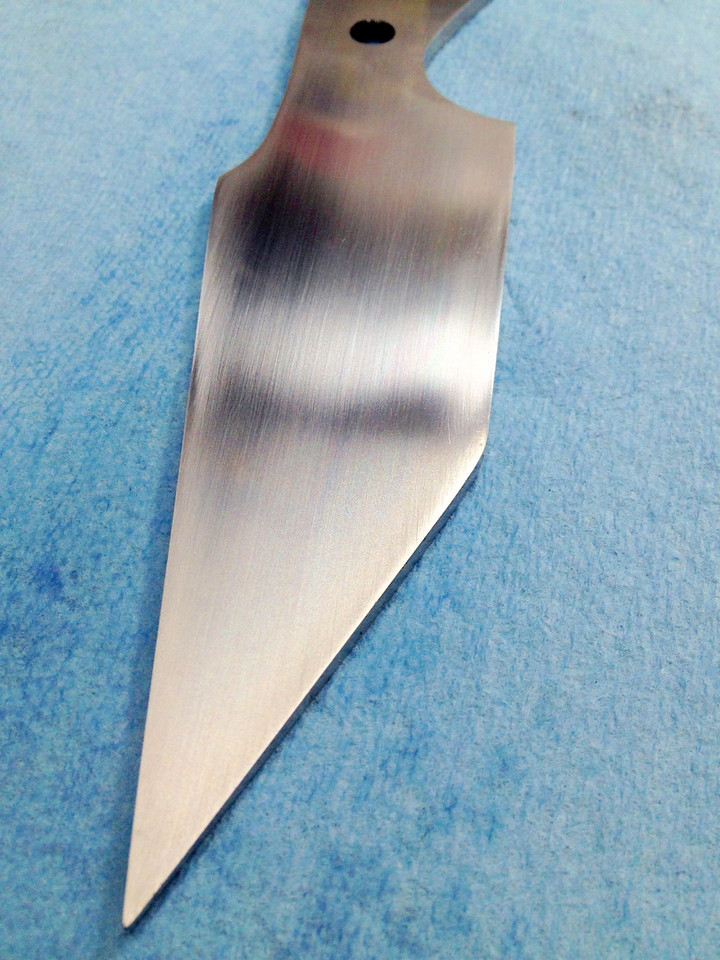 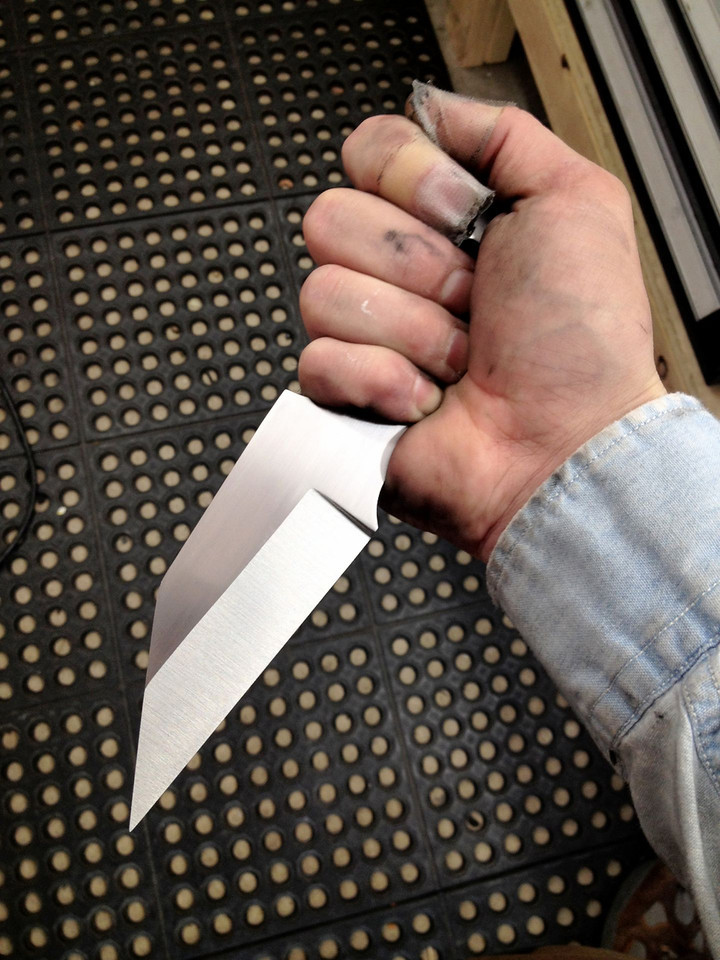 The front of the multicam G10 scales hand-finished to 400-grit. 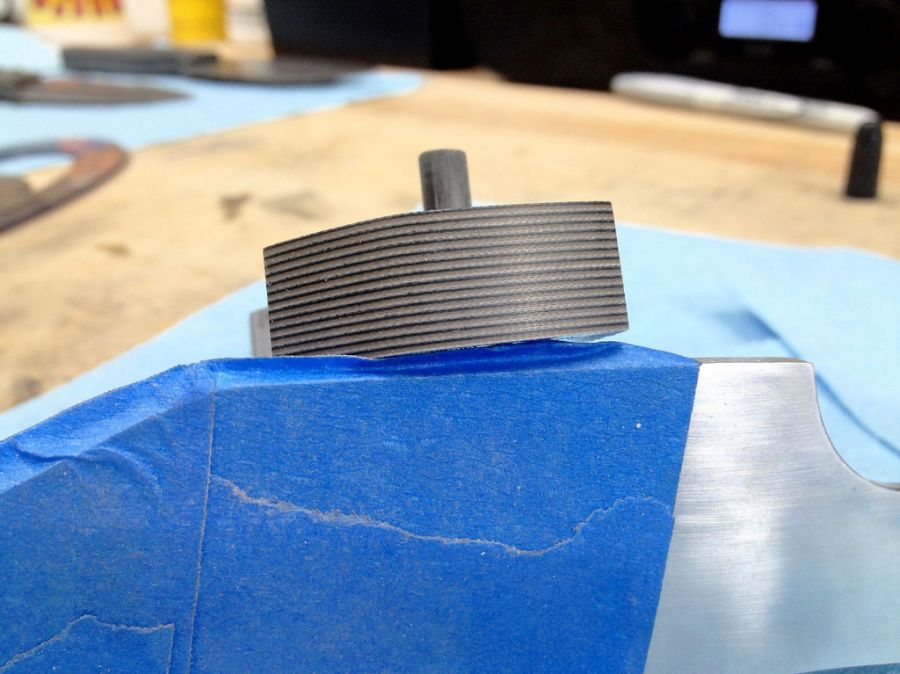 It was now time to epoxy and pin the G10 scales to the REH's tang.  My shop assistant helped me with this task.  You can see the REH and scales all clamped up on the workbench behind her. 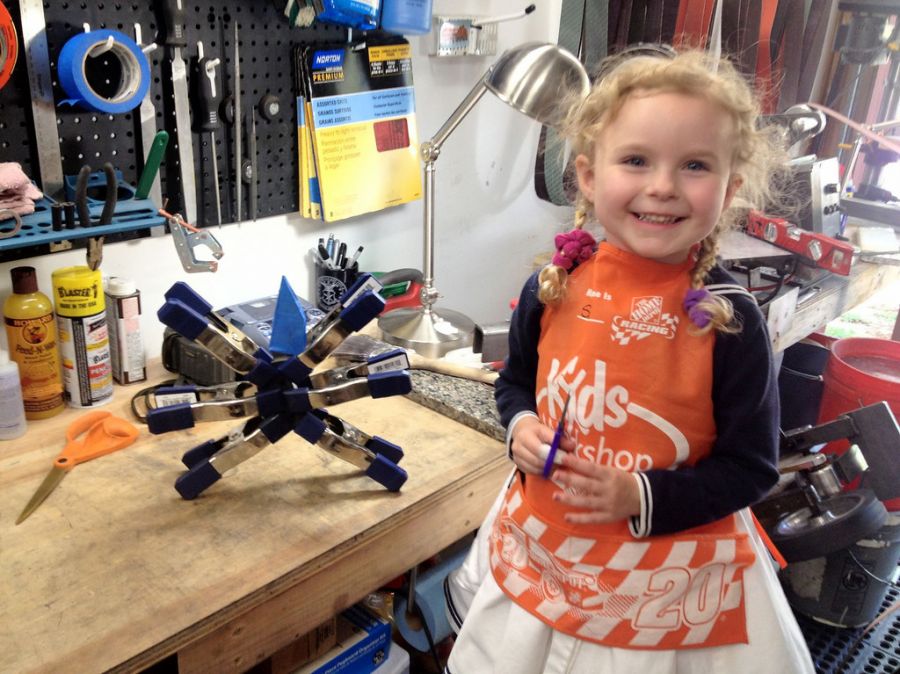 After the epoxy was allowed to dry overnight, I used the 1" small wheel on the KMG to bring the scales flush with the tang.  They are now ready for final shaping. 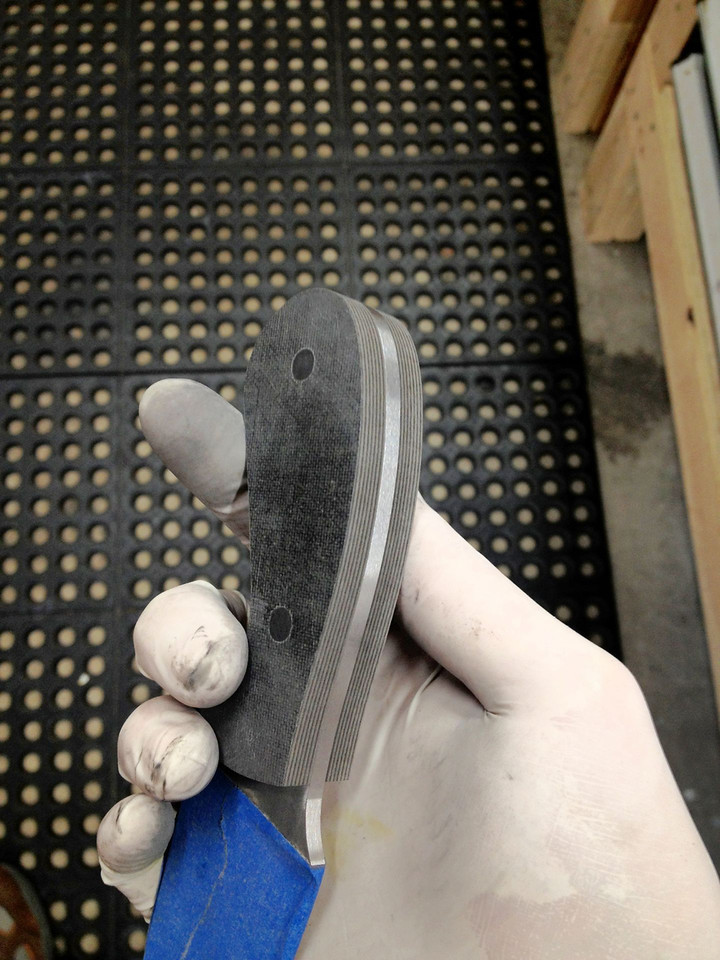 Because of this knife's intended purpost, I sculpted the scales with a very aggressive texture. 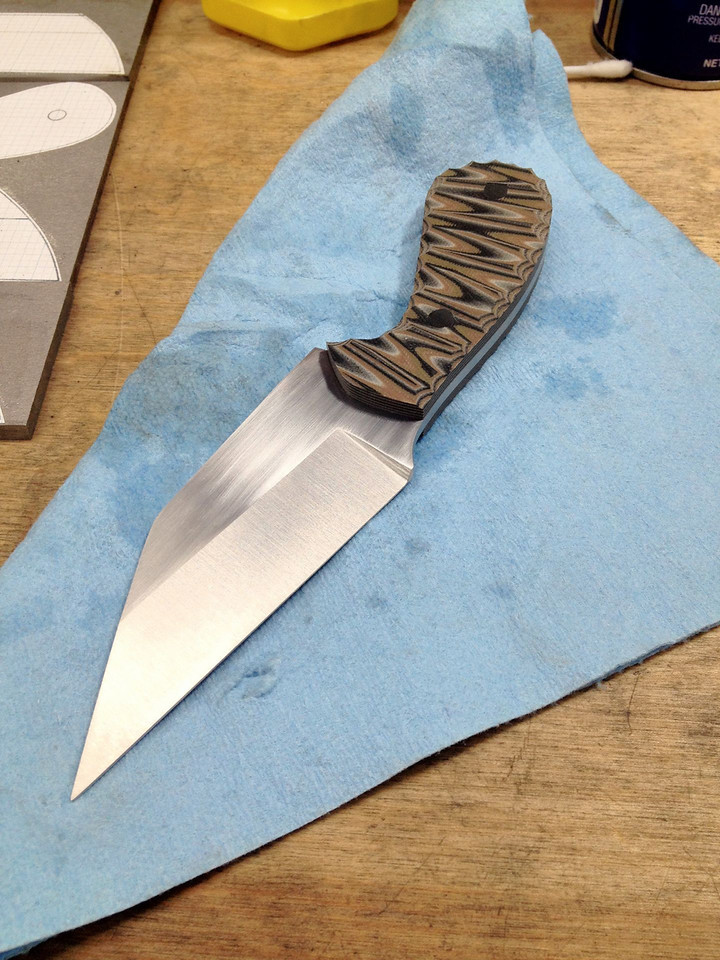 Once the scales were finished, it was into the tumbler. 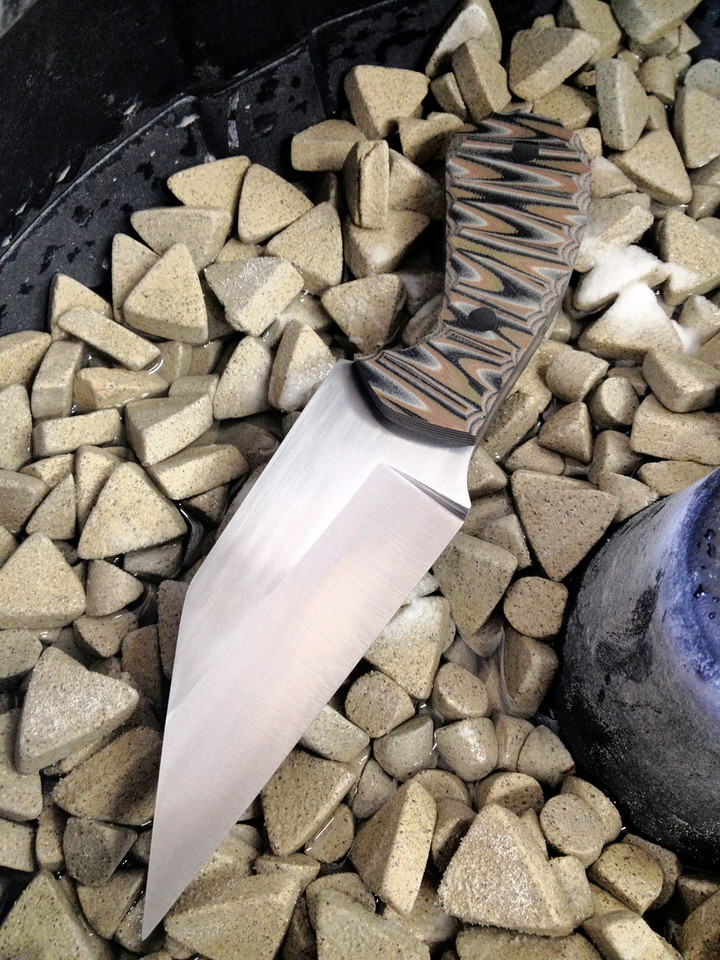 After tumbling, it was time to put the final edge on. 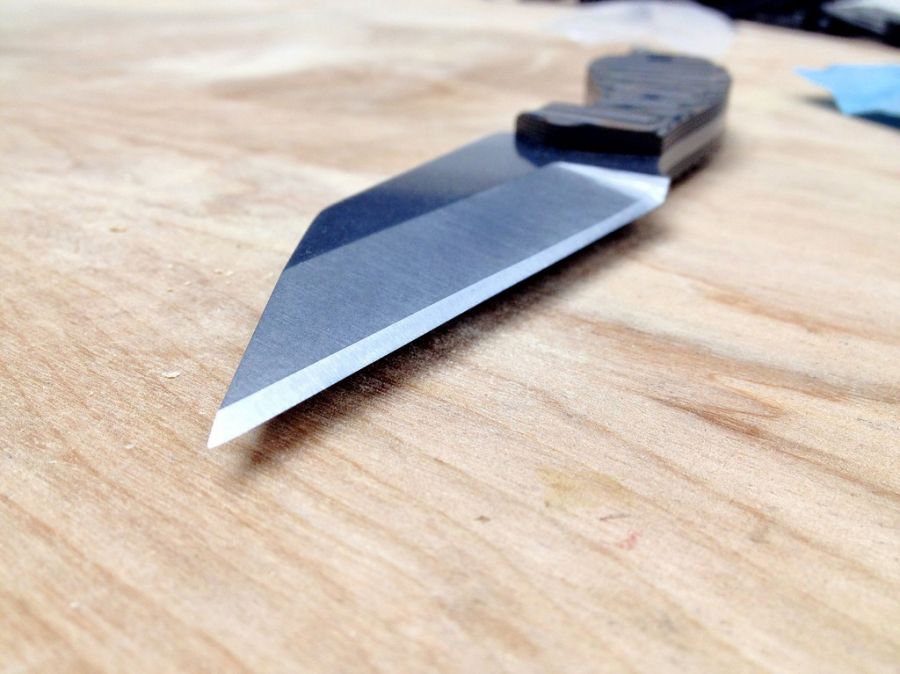 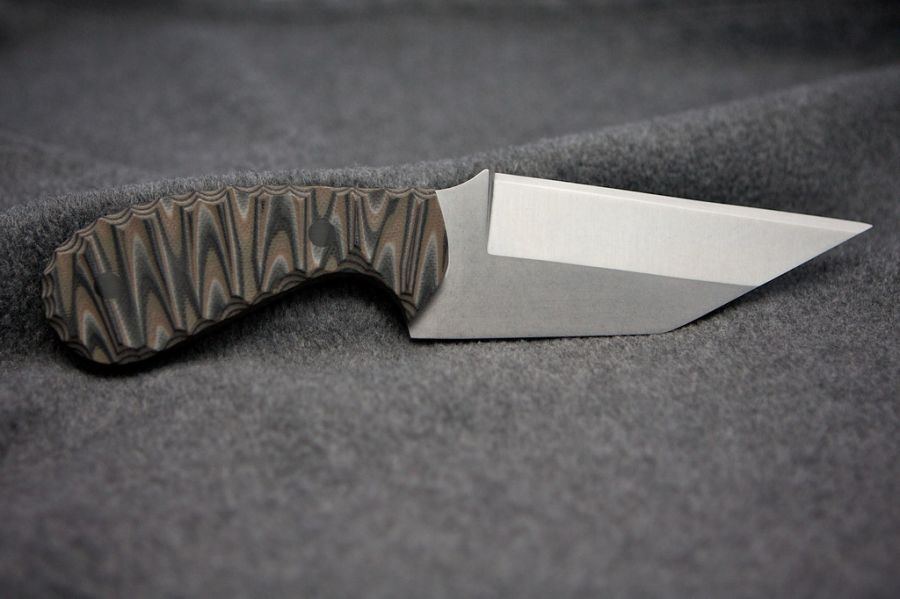 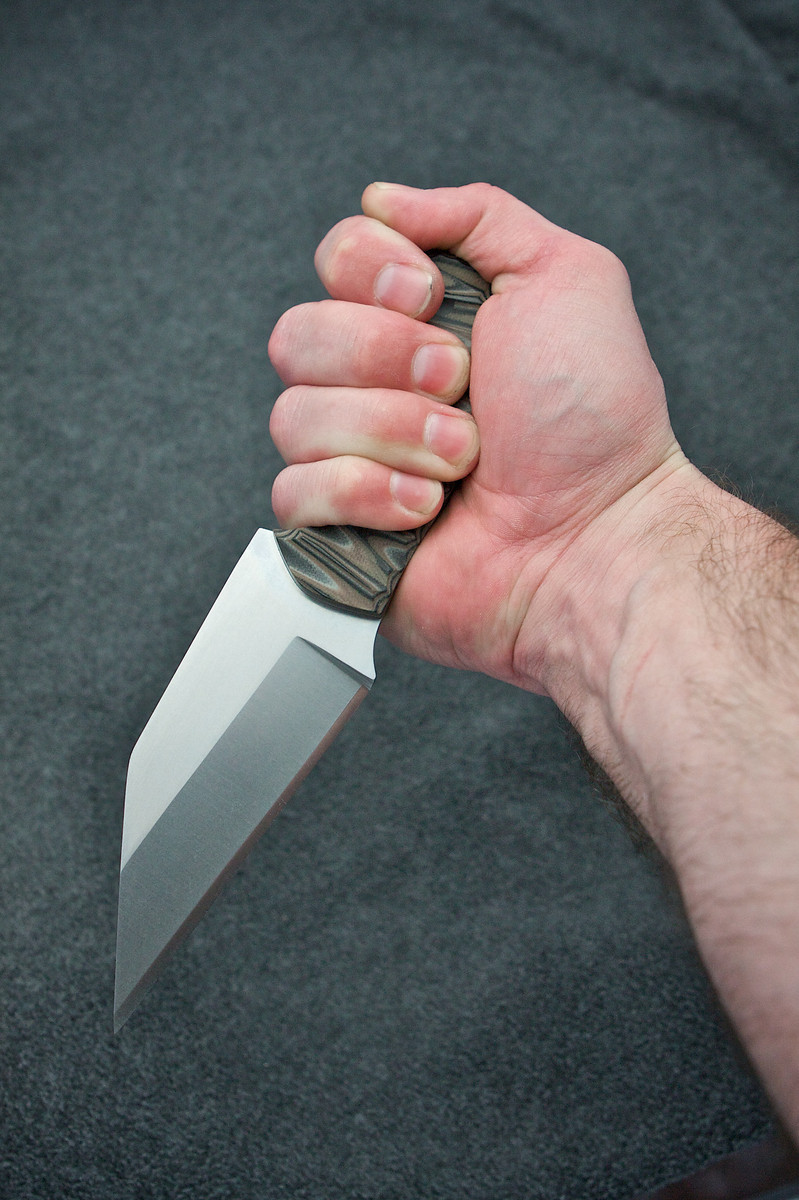 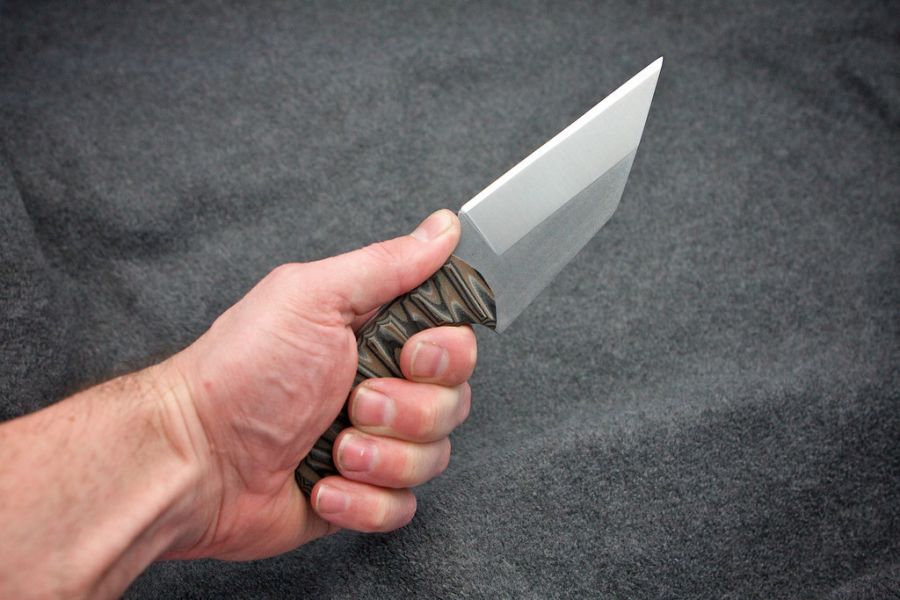 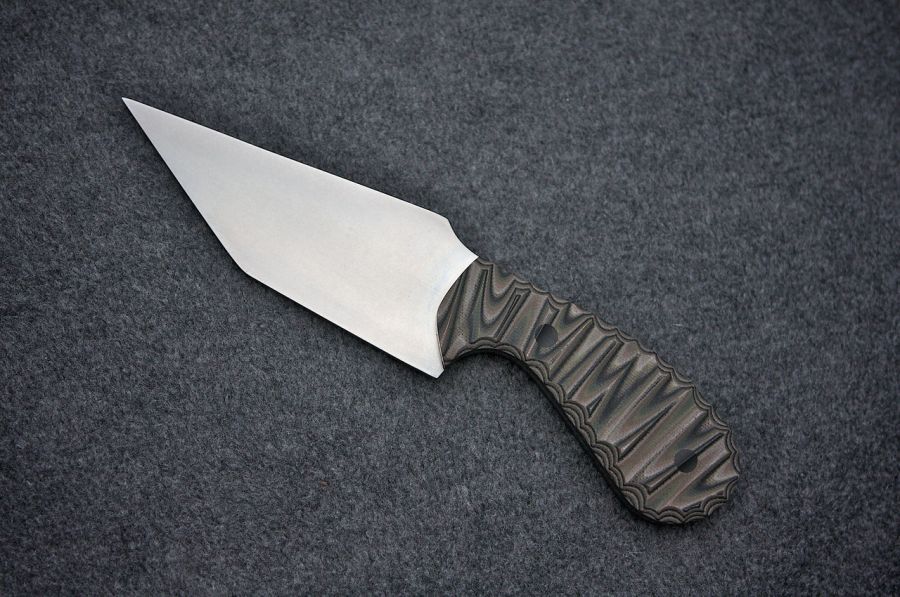 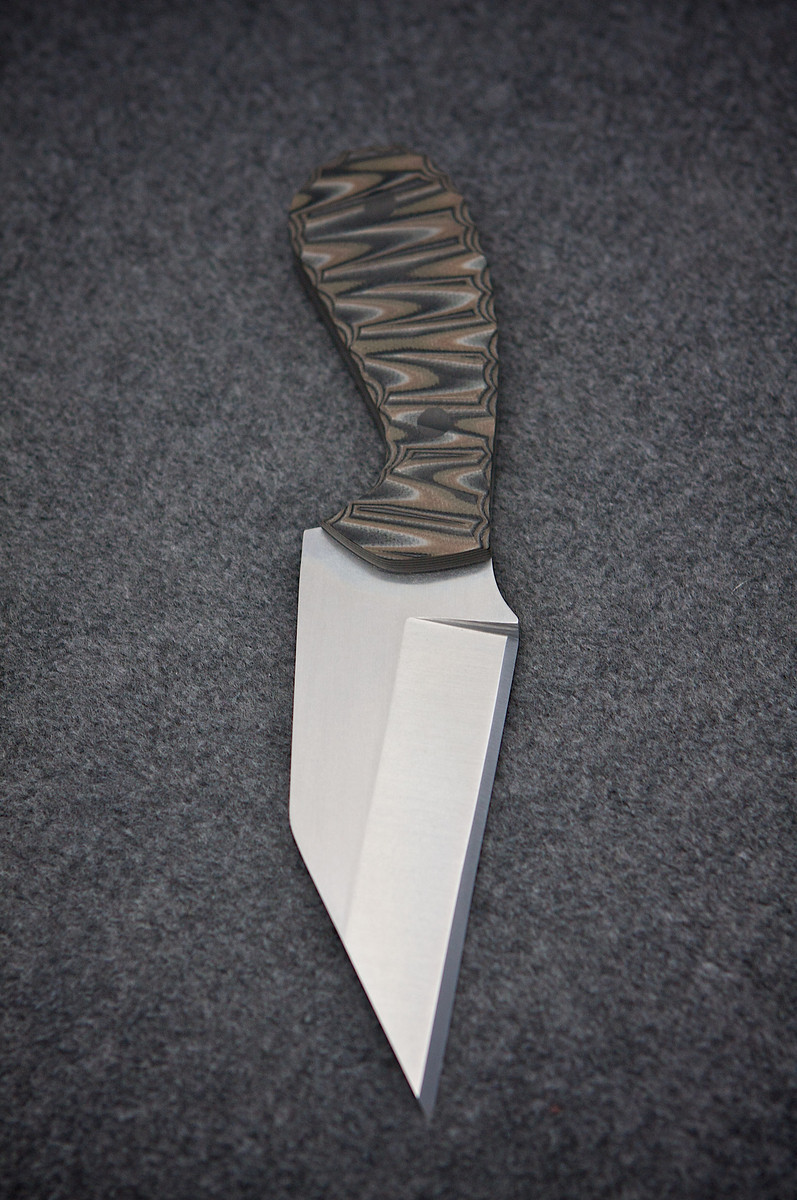