Sword build.  This one is inspired by the Gladius Hispaniensis.  First I draw a template, based on an extant historical specimen.

The template is cut out and traced onto a piece of 1075 steel.

I begin profiling the sword on the bandsaw and finish on the 2x72 belt grinder.  I also drill two holes on either side of the tang to allow me to hang the sword during thermal treatments.  They will be removed after heat treat.

Straightening using the arbor press.  I'll be doing this a LOT until after the sword is heat treated.

First I grind a small amount of distal taper into the last third of the blade, then I break the 90.

I begin laying in the bevels on the flat platen of the belt grinder.

I alternate between the grinder and draw filing to help keep my centerline straight and true.

First I normalize, then run her through several descending-heat thermal cycles, cooling in still air between each.  This will refine the grain and result in a more durable blade.

Here is a vid showing recalescence after a thermal cycle.  If you look closely you can see the shadow moving from the edge to the center of the blade.  This is a phase transformation.  In this case, austenite transforming into pearlite.

Vigo the Carpathian ever present as the Gladius cools from a thermal cycle.

Quenching the Gladius.  My goal is to differentially harden the blade, with the thicker middle portion becoming tough/ductile pearlite and the thinner edges becoming hard/strong martensite.  I considered using clay to help accomplish this.  But with the several thermal cycles (which lower hardenability), the diamond cross-section, and my medium speed quenchant, I was confident that the sword would naturally differentially harden.  This would form an auto hamon, a visual delineation between the two phases of steel.

After tempering and straightening the sword, I removed the holes on either side of the tang, refined the profile of both the blade and the tang, and continued refining the bevels on the flat platen, bringing them down into the tang to facilitate fitting the guard plate.

The grinding revealed the auto-hamon.

At this point I switch from the flat platen to the rotary platen on the Wilmont 2x72 belt grinder to add some convexity to the bevels and feather it to sharp.  This will create a more durable edge geometry.

And here she is after being feathered sharp.  She's dangerous now and must be handled with care.

At this point I chop into a knotty piece of 2x4 all along the edge and inspect for damage.  None is found, so I proceed to hand sand the blade.  I take it to a dirty 1200-grit, which makes the hamon quite a bit more visible. At this point it's time to begin working on the hilt, after which I'll finish polishing and etching the hamon.

After much thought, I decide to use stabilized curly satinwood for the guard and pommel (on the left) and stabilized amboyna burl for the handle portion of the hilt (on the right).  This will be similar tones to the hilt of Scaeva, the last sword I made.

Before the woodworking begins I must first fit the guard plate to the tang and shoulders of the blade.  I coat a .187" thick piece of copper with layout fluid.  After scribing perpendicular centerlines onto piece, I then scribe the cross-section of the sword.  If you look closely, you can see that I've punched two marks into the tang below the shoulders.  There is a single mark punched into the other side.  I will add corresponding marks to all of the hilt components to keep them oriented the same way as they are shaped and fitted to the sword and each other.

I use the drill press to drill a few small holes into the copper, then use small needle files to begin connecting the holes and continue to remove the material within my scribed diamond.  Then it's just a matter of file, check fit, file, check fit . . . repeated a few dozen times.  In the below photo you can see the guard plate is about 85% fitted.

And a short vid of the guard plate fully fitted. 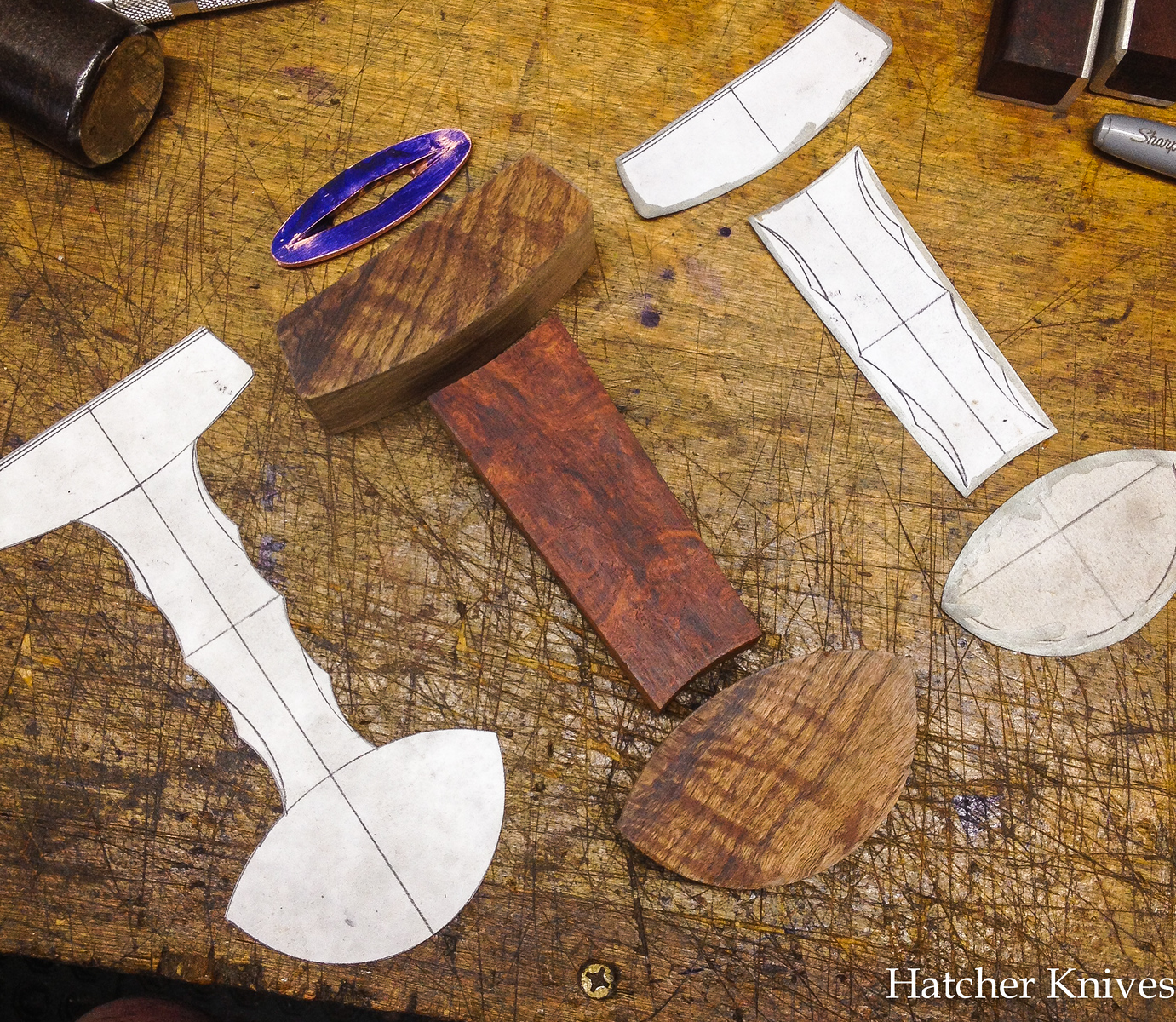 Next step is drilling and filing the amboyna handle until it is fitted to the tang and satinwood guard.  In the below photo you can see that I'm almost there.  The same "file, check fit" repetitive  process is repeated for all of the hilt components.

The amboyna is now fitted to both the tang and the guard. And the process is repeated yet again for the satinwood pommel.  You can also see I've added some layout lines to the amboyna handle in preparation for sculpting the finger grooves.

First step in shaping the handle portion of the hilt is grinding finger grooves into the side faces of the amboyna using the layout lines as a guide.  I do this using a small wheel with a 36-grit belt on the belt grinder.

Next step is to repeat the above process on the front and rear faces of the handle. 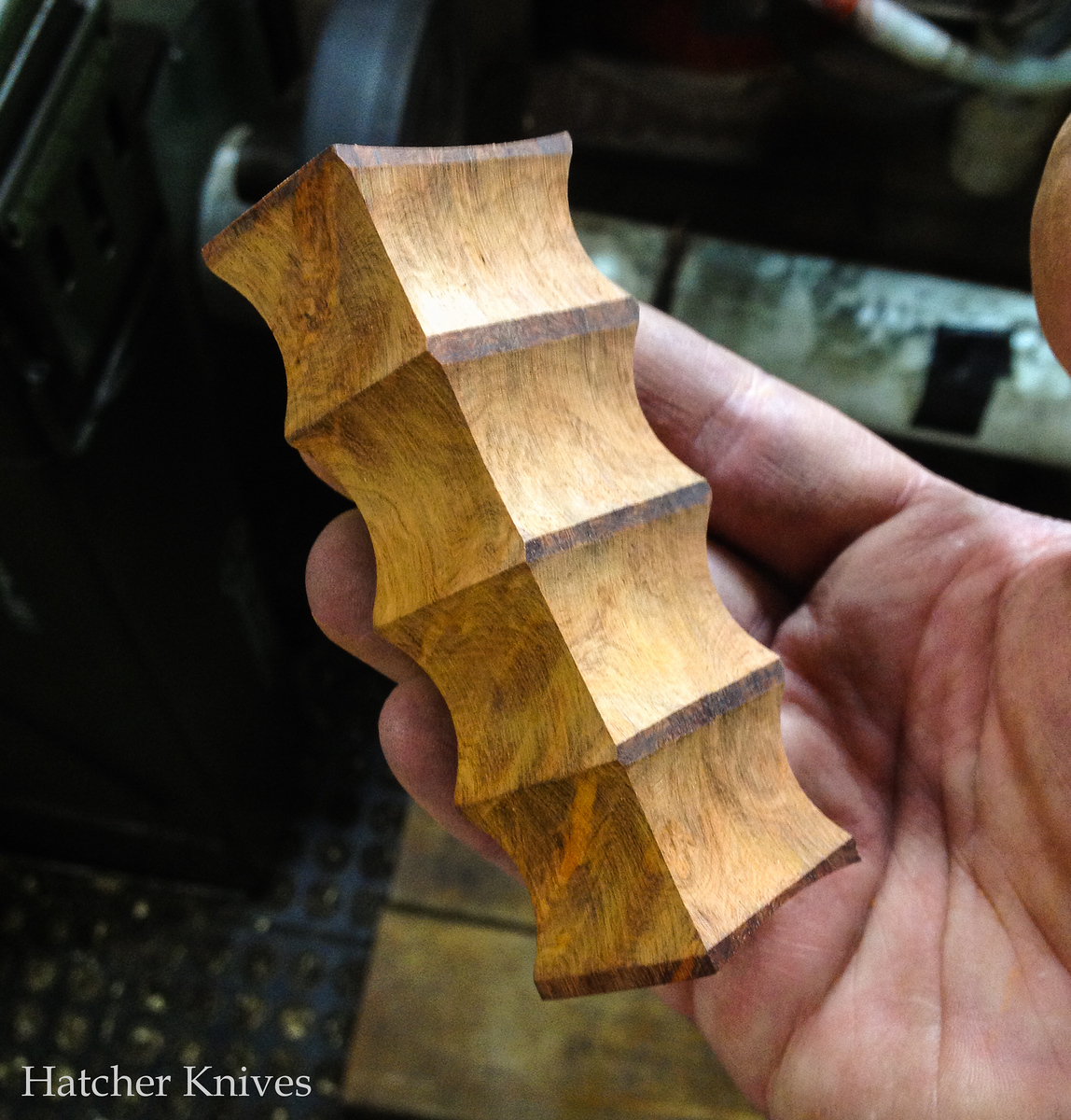 Then repeated again for the corners.  This results in roughly the final shape, slightly oversized and ready for refining. 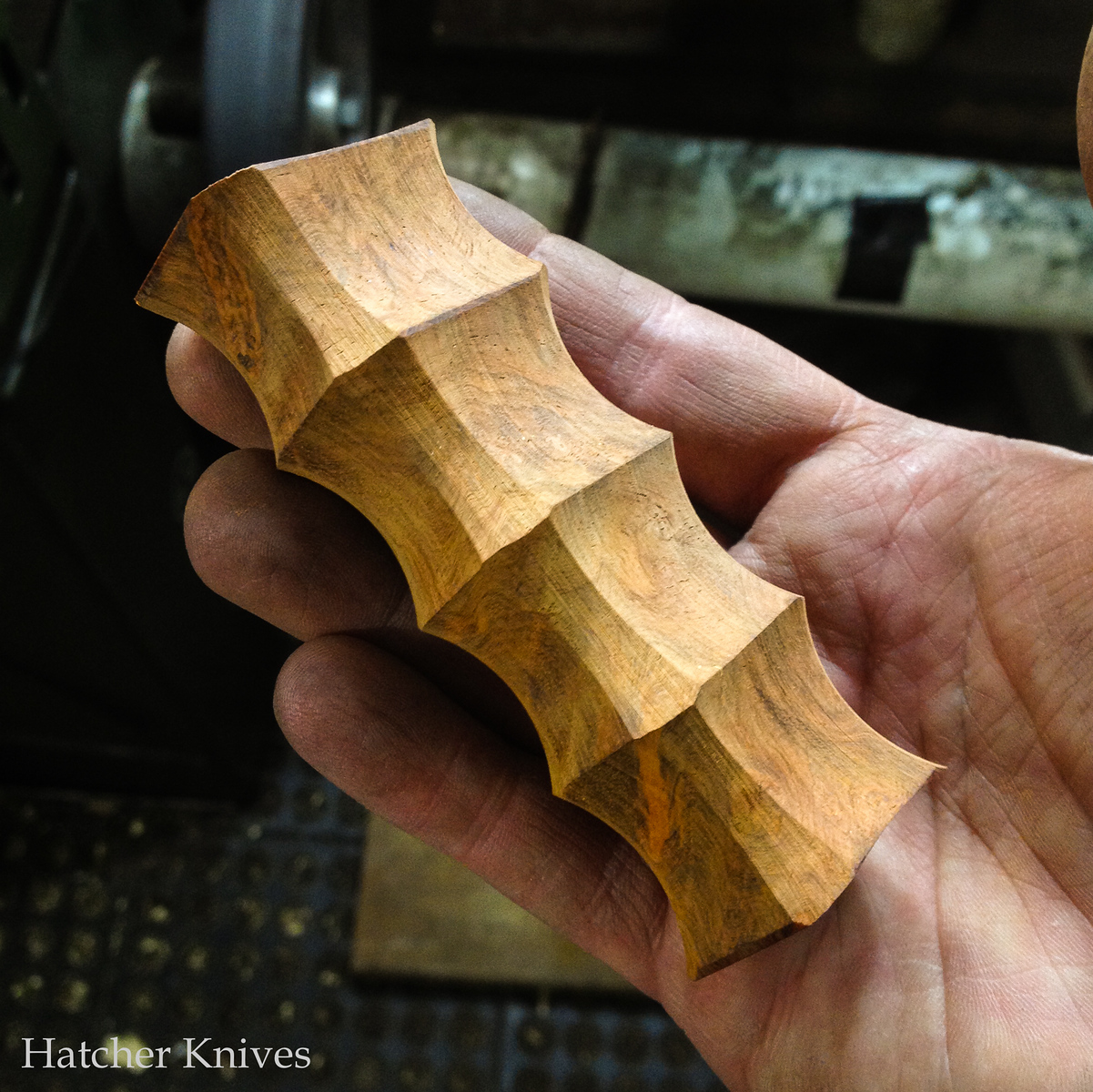 Then it's time to shape the satinwood guard and pommel.  Here's a vid of the hilt brought to shape and ready for refining.

I inlay a piece of copper into the pommel to act as a peen block. 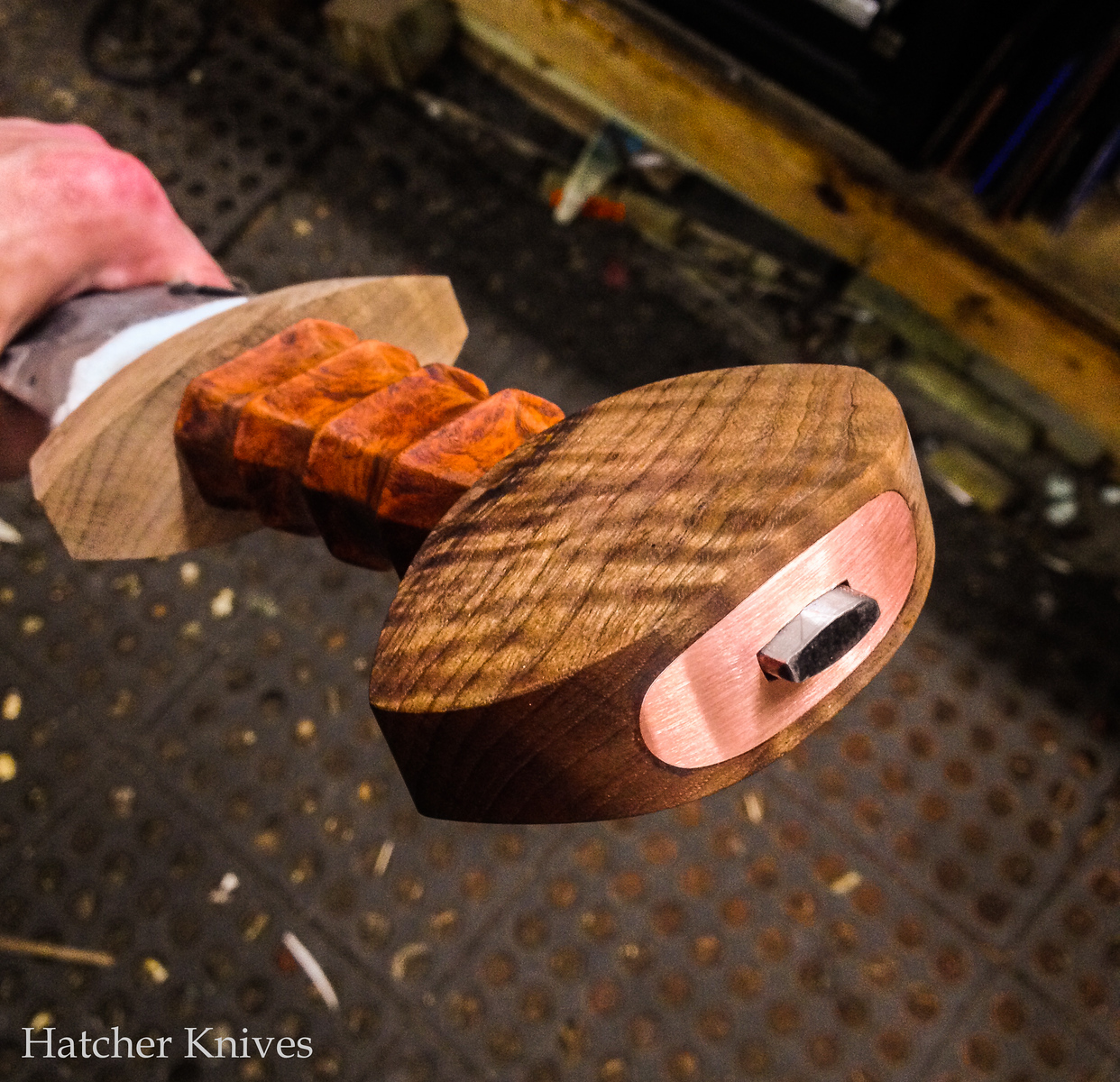 And here is a video of the hilt components finished to 2000-grit with a few coats of Tru Oil.

It's now time to bring the sword blade to a high finish and etch & polish the hamon.  This is a time and labor intensive process and this was my view for many, many hours over several days.

The hamon after the first etch & polish cycle.

And a short video of the hamon after several more etch & polish cycles.

A few more cycles later and I think I'll call it done.

It's now tine to glue-up the hilt with G/flex epoxy.

The next day I peen the tang over to lock the hilt components in place.  I start with a big old Plumb ball peen hammer with polished faces. I use short, light strikes, and let the weight of the hammer do the work. A center punch is used to makes a series of divots to help start the deformation, and are re-punched as they disappear. I'll switch to a smaller hammer to refine after it has mushroomed. 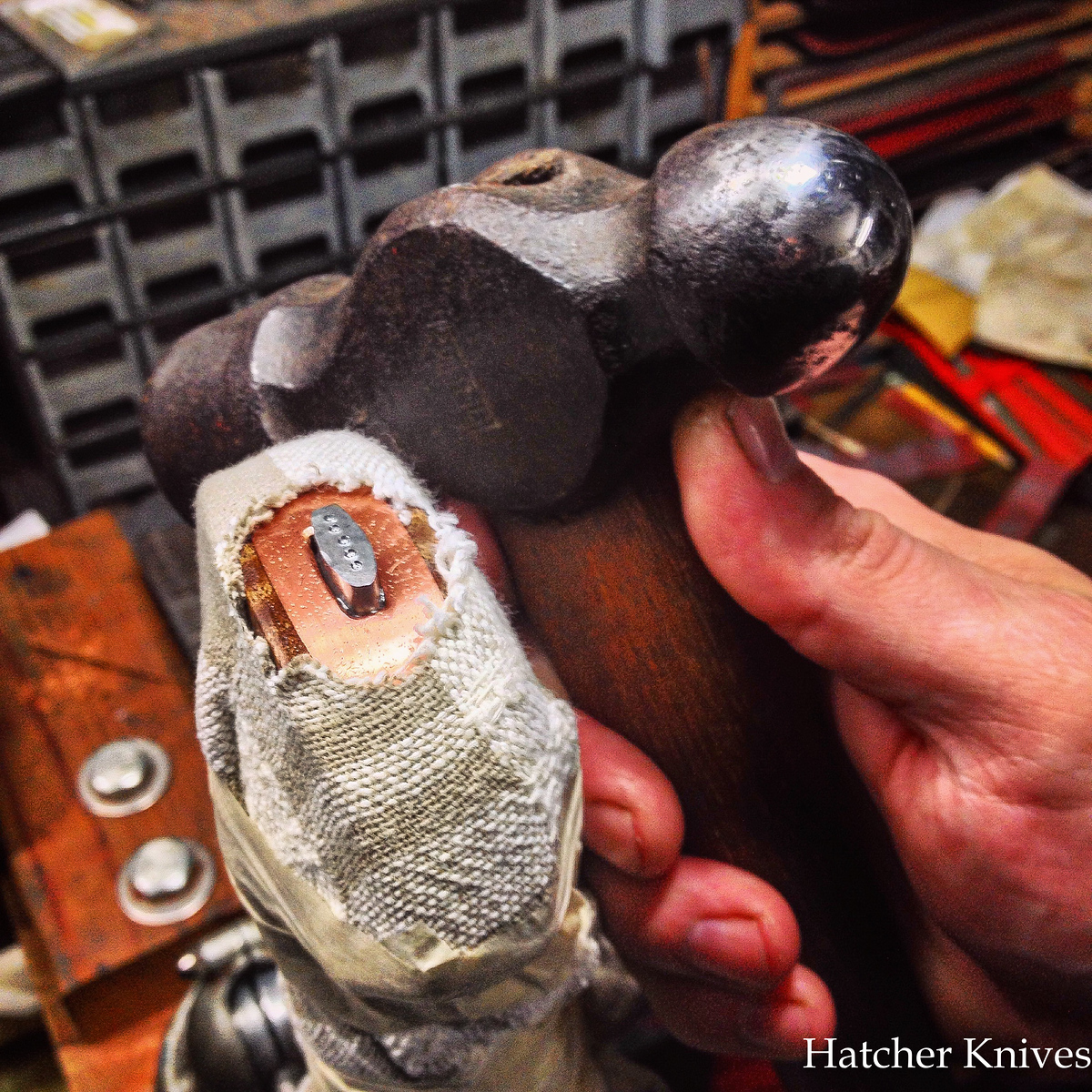 Here is the tang after it has been peened and polished. 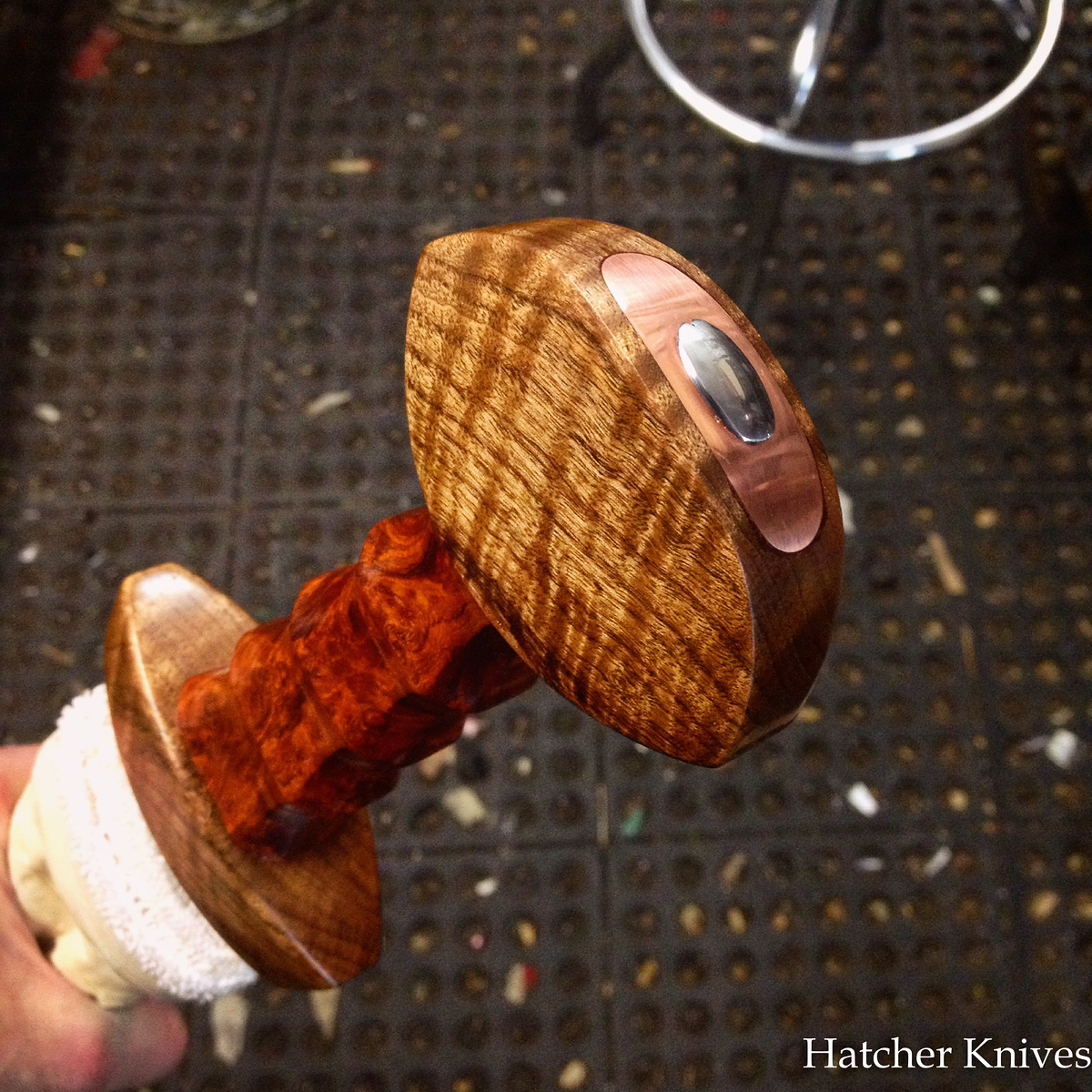 The sword is now complete.  I have named it Scipio.  Thank you for following along.  Questions and comments: shawn@hatcherknives.com 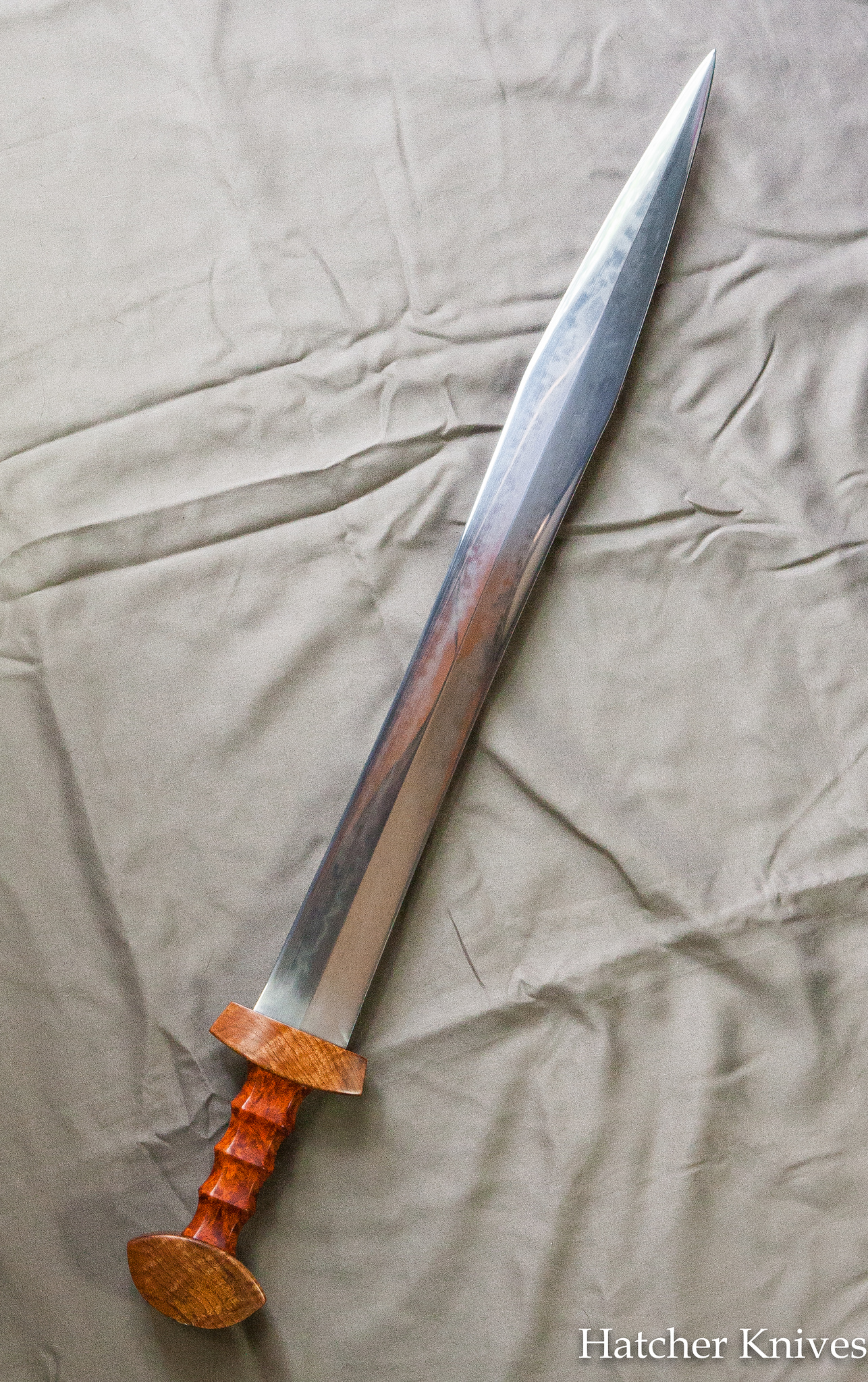 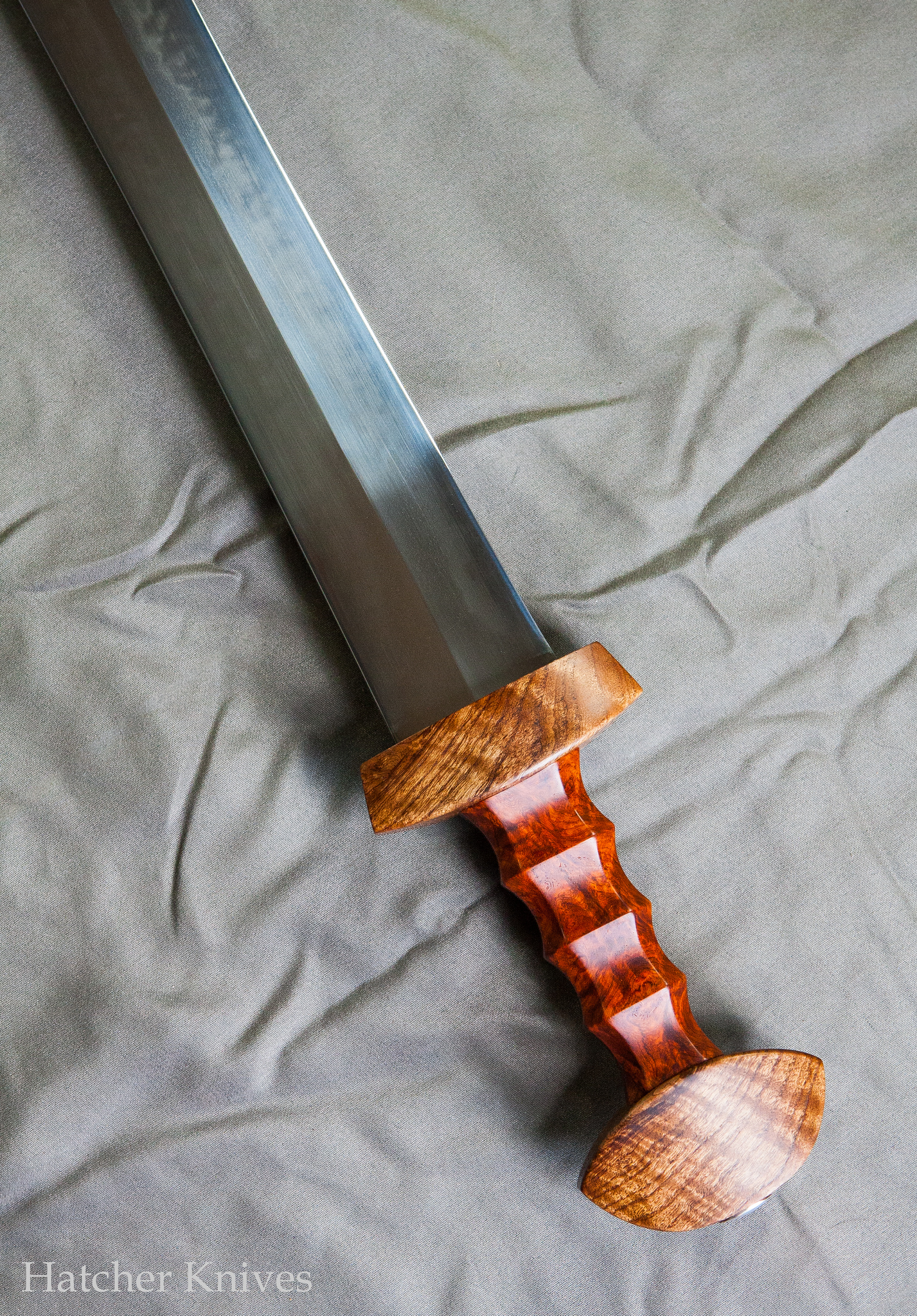 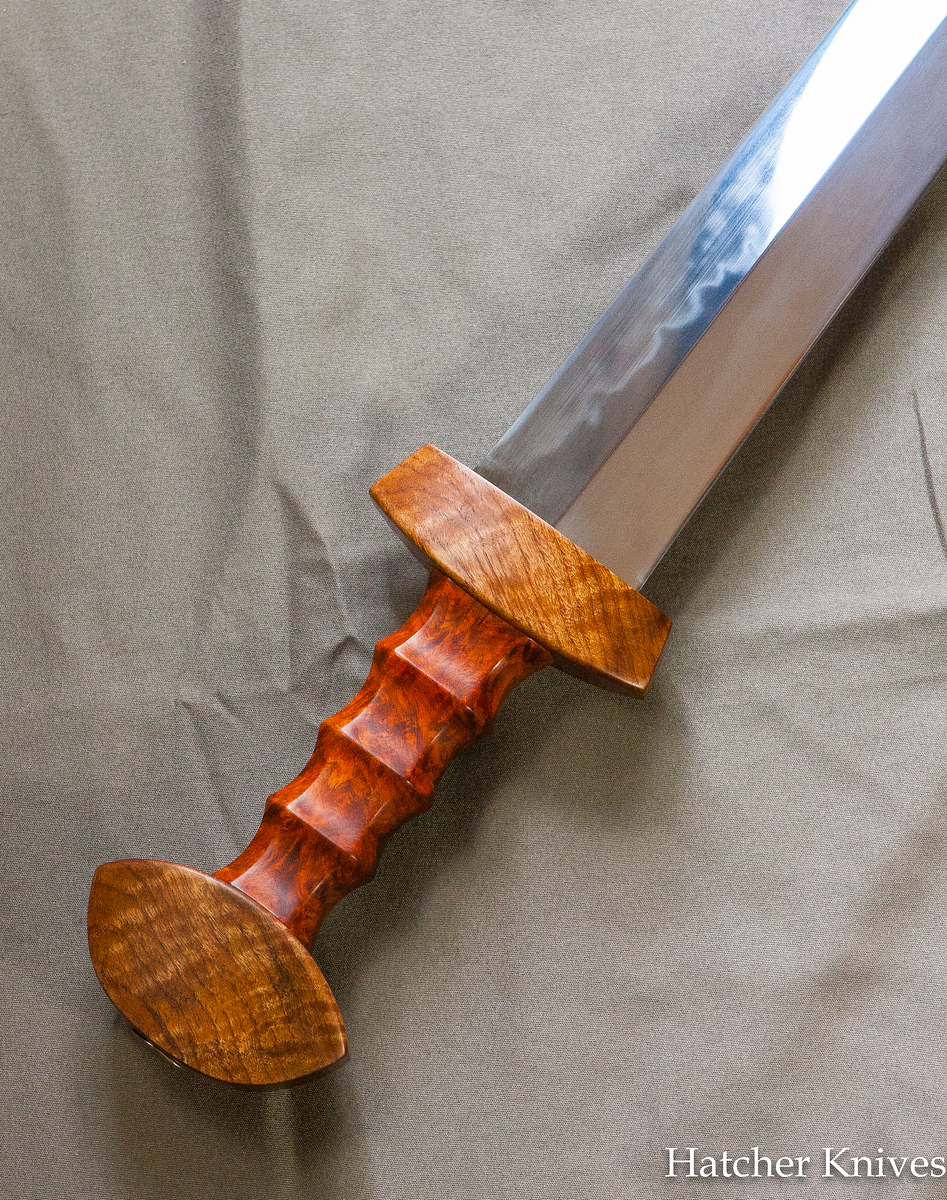